Yesterday I had a die hard shoppingday with one of my friends. We decided to go to the Primark in Almere, but we wanted to be there very early, so we took the train around 7.45 o’ clock! I know, we’re crazy, what a girl wouldn’t do for shopping hehe. But if I’m totally honest, the Primark didn’t meet my expectations. I’ve only been to the Primark 2 times, and the first time was years ago, and I remember not being that satisfied either. I had very high expectations this time, because I saw a lot of cute and especially fluffy stuff on the internet from there. But when we arrived at the Primark, almost all the things I wanted were sold out. So that was kind of a bummer and I don’t think I will ever do this again, I just don’t think it’s worth it. The nice stuff just gets sold out so fast, the chances of you getting what you came for are very low. I wished that I lived near a Primark, so you can check the store frequently without travelling so far. But on the other hand, I live nearby the Primark in Zaandam, and I’ve never been there… So I think it’s not my store or something. Wow, I just wrote a whole paragraph about the Primark… But after that we went to the Bershka. Unfortunately we only had 20 minutes left cause our train was leaving. 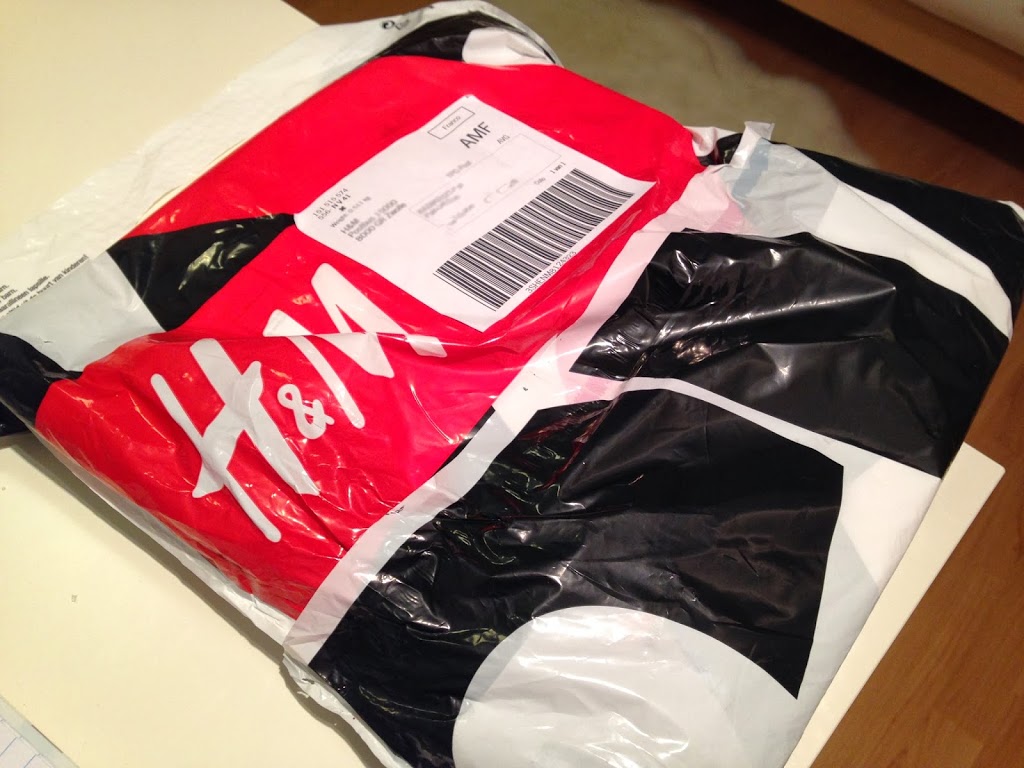 This week my order from H&M also arrived (after 2 months!), so I decided to put everything together and show it to you. But so you know, I didn’t buy everything at the same time haha. I think the packaging of H&M orders is kinda ugly haha, don’t you agree? I do love their styling in general, I just don’t think this packaging is very cute. 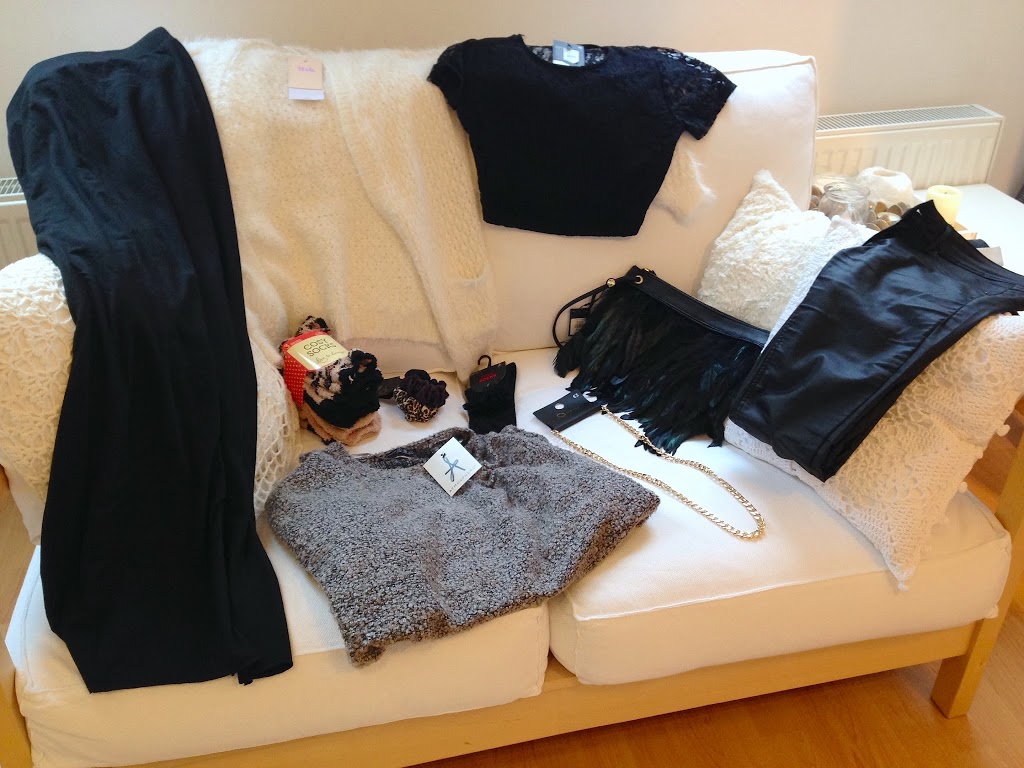 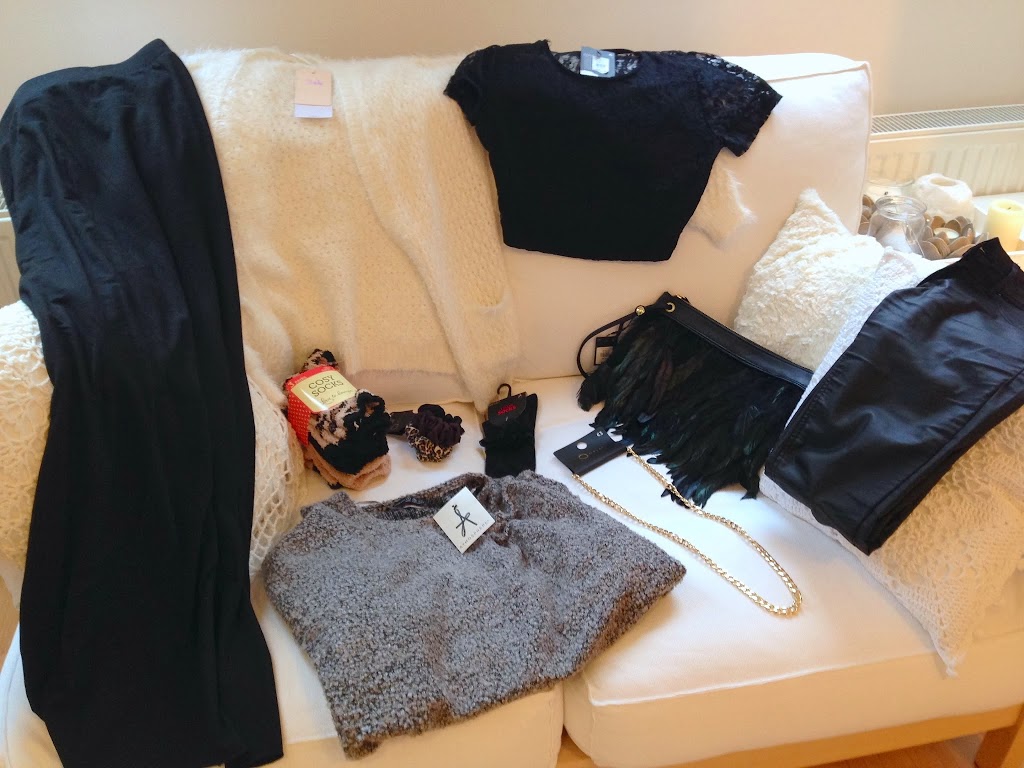 Oke damn, it looks like so much stuff all together haha… Btw, I find it hard to make nice photos of new clothing I bought, because everything always looks wrinkly and it’s hard to tell how the pieces look exactly. But oh well, at least I tried! The black piece on the left side is a maxiskirt with a slit from H&M (and an example of what I mean, you probably wouldn’t guessed that it was a maxiskirt right, but just a strange black thing haha). I really love the split, because I think maxiskirts with splits look better on petite girls like me. It’s not a total black mass if you know what I mean. The jeans on the right side are also from H&M and they’re made from a interesting material. They’re in between fake leather and stretchy denim. I really love the finish of them and how they fit, I think I will wear them loads!

The little things in the middle are 3 scrunchies (I think they’re cute, fuck what everybody says haha), some black frilly socks, which I can wear in my cutout booties, a long gold chain (which I also bought for my boyfriend haha) and a feather clutch. I don’t own any clutches cause I think they are so unpractical, but this one was just so beautiful that I had to have it. I actually didn’t buy it for myself but for my mom, cause she does a lot of photoshoot styling so she likes interesting accesories like this. But I will borrow it some time haha. 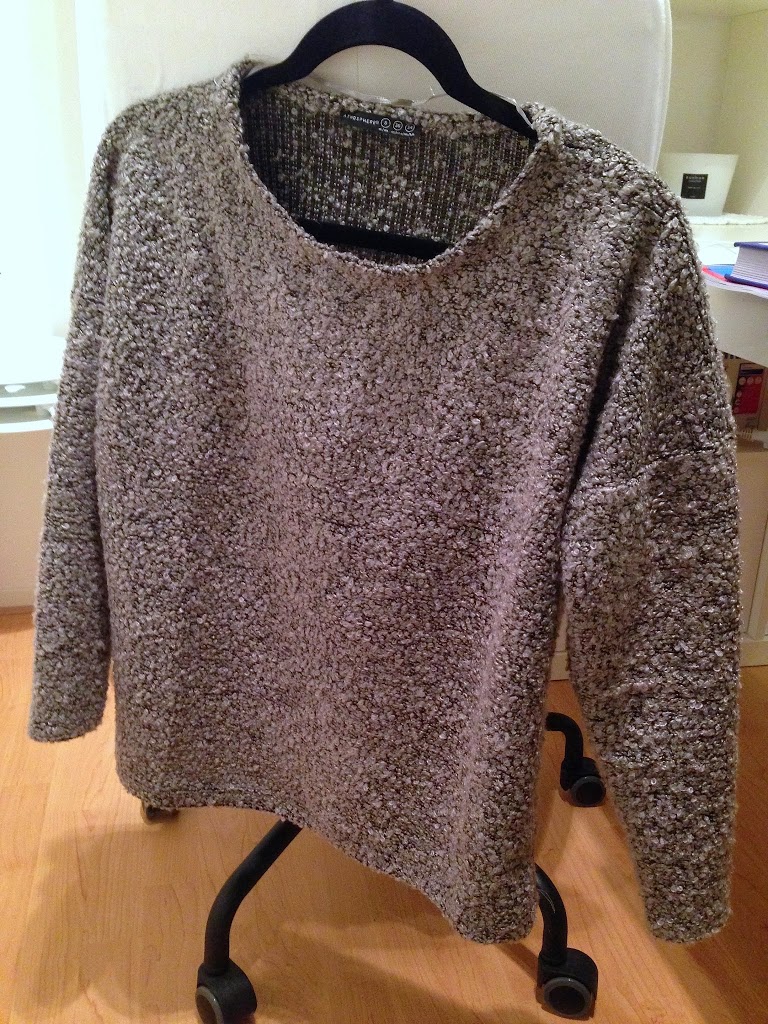 Now it’s time for some close-ups! This sweater is from Primark, and at first I didn’t thought it was that cute, but I loved the way it looked on my friend, so I had to try it on as well. It’s a very interesting material, it looks like a mixture of boucle and fluffy fabric. I probably will do a ootd with it pretty soon! 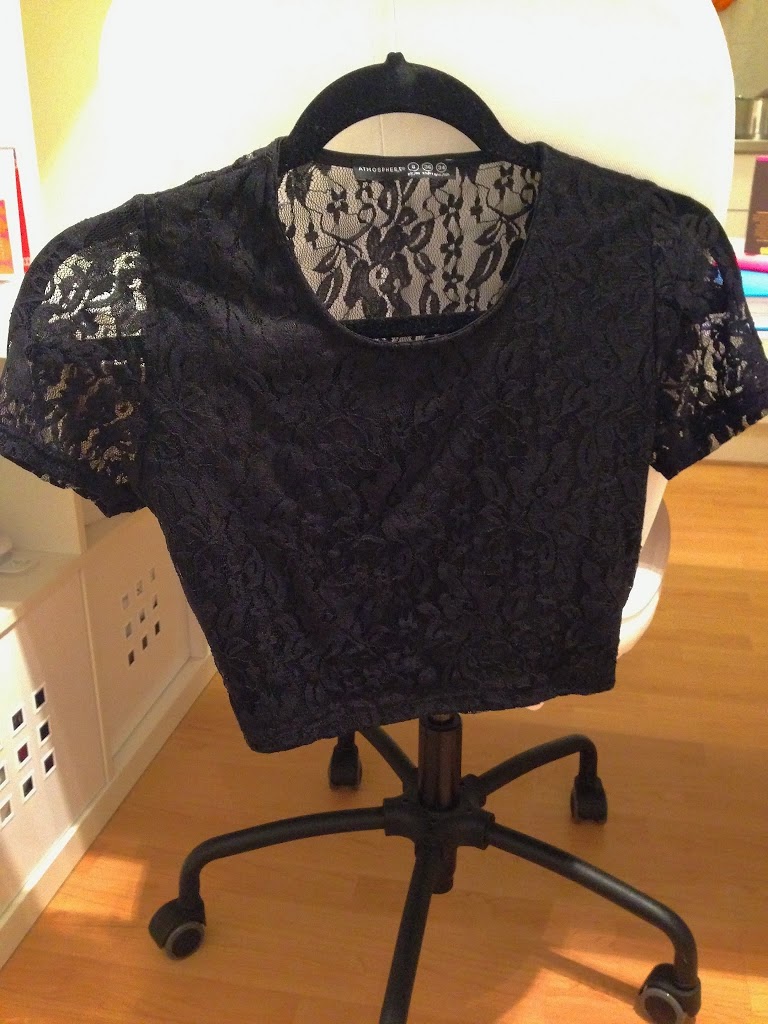 Yes, I know what you’re thinking: why in the world would you buy a croptop when it’s getting winter? I don’t have a very good reason for it, other than that I was searching for ages for the perfect lace croptop, and I think I came pretty close! I love (like really fucking love) the fact that it isn’t see-through in the front, so that you don’t need to wear a singlet underneath it and get constricted haha. I just really hate that feeling, and I always have it with lace-y things. The back is see-through though, but I think that if you wear a black bra underneath it, it’s okay. 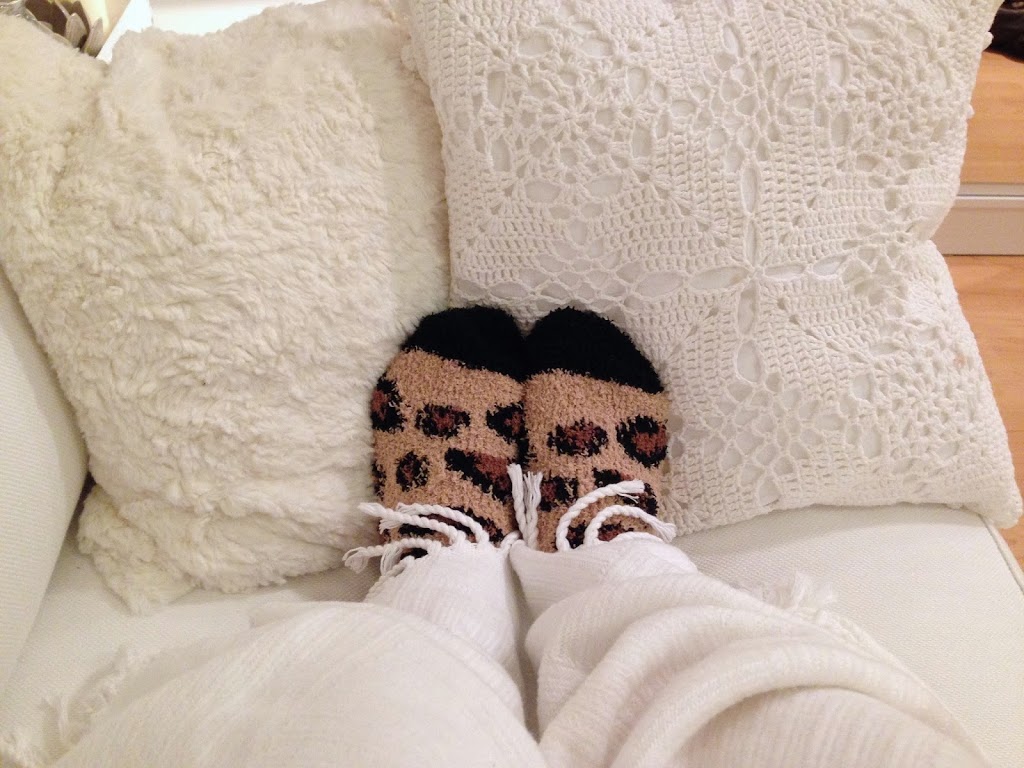 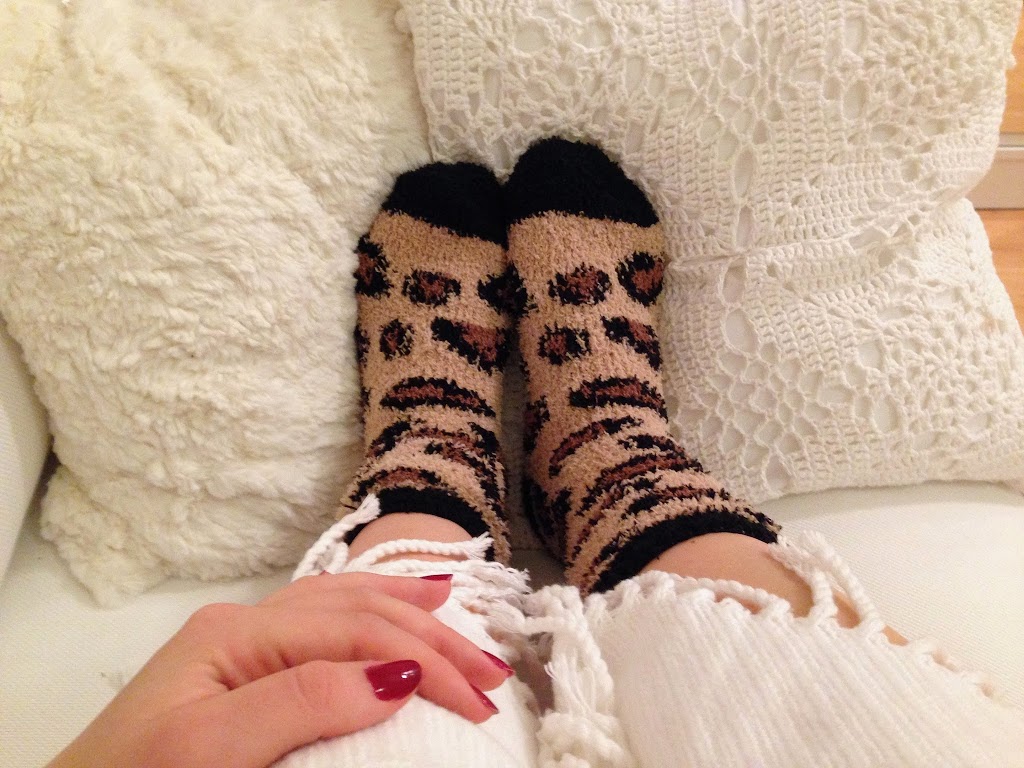 Well they do call these socks for a reason ‘cosy’, cause them, they’re so fucking soft haha! Don’t you wanna just bundle up when you see this pics haha? I also love the fact that they’re leopard. And the last pic is also a sneak peak of my nails haha. 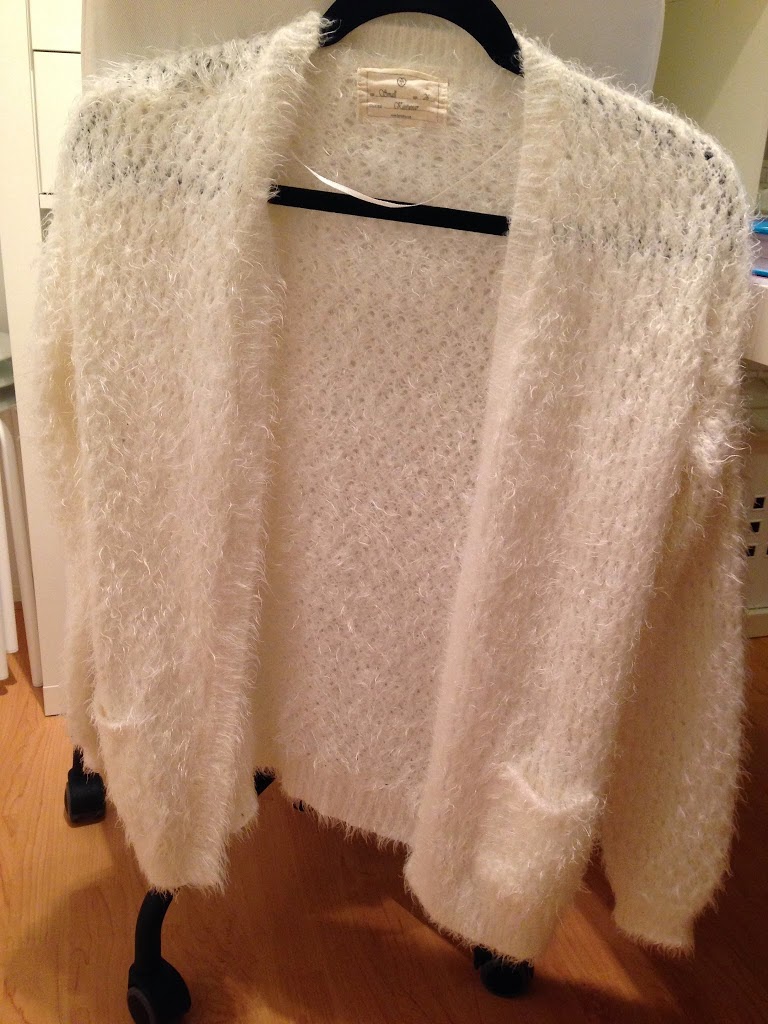 Last but not least, this cardigan from Bershka. I actually thought Primark would have a lot of these fluffy things because it’s very on trend now, but everything was sold out… Luckily I found this one in the Bershka, because I really needed some things I could throw over my tees. It’s very soft and I just want to cuddle with it haha (do you see a pattern of all things soft and fluffy haha?).

Well that’s it for today, I hoped you liked all my new pieces. I’m still on the hunt for a fluffy sweater (I think I want a black one) and maybe some highwaisted discopants and a fur vest. But we’ll see haha!