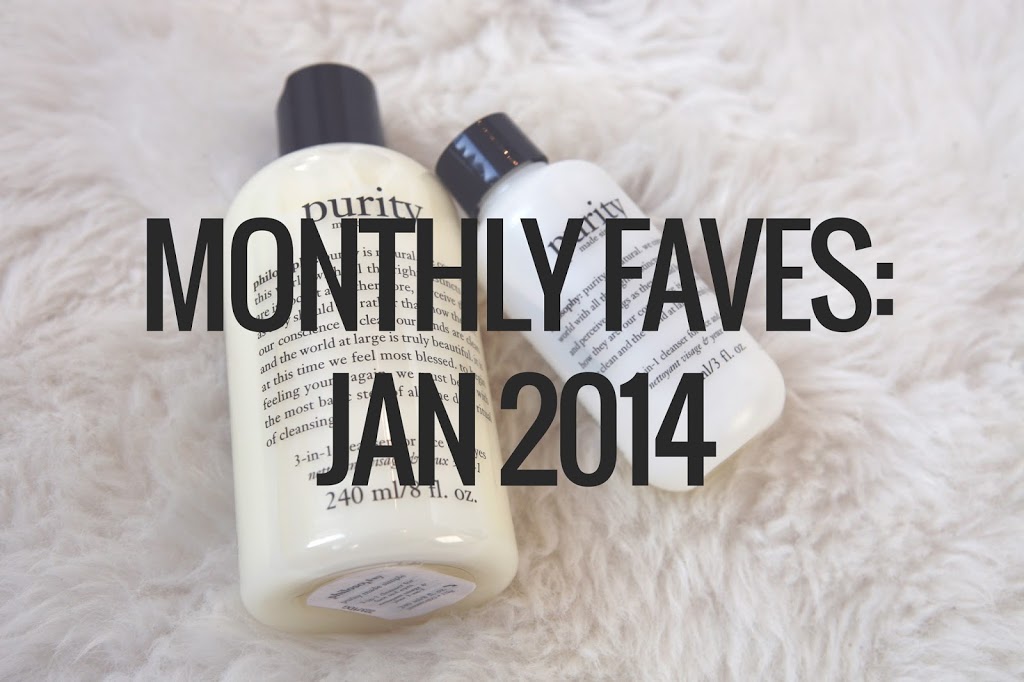 Hey you!
I really enjoy reading monthly favourites articles on other blogs. I think it’s very interesting to see what kind of products people have been loving for the past month. I usually don’t like to read a very long review about a product, but reading a monthly favourites post is the perfect way to discover great products without having to read a lot of reviews. So yeah, because I love these kind of posts so much, I decided that it was time to start one of my own! I have a couple categories I want to discuss, so not only beauty and fashion!
Beauty

My first beauty or actually skincare favourite is not a new one. I already talked about it in my Faves of 2013 post, but I’m still using it religiously! It’s the Philosophy Purity Made Simple Cleanser. I’ve almost finished my travelsized one, but I bought a new one in Dubai (ooh I just told you one of the products I’m going to mention in my Dubai haul haha!). It removes my make-up very well, it leaves my skin feeling moisturized and it has a nice smell (but I can imagine that not everybody will like it, it’s not an universal smell). If you’re looking for a good facewash, I really recommed this one! I have severe combination skin (I can have dry patches and acne all over my face at the same time), so it’s hard to find products that don’t dry my skin out, but also won’t clog my pores. But the Philosophy Purity Made Simple Cleanser works well for me! 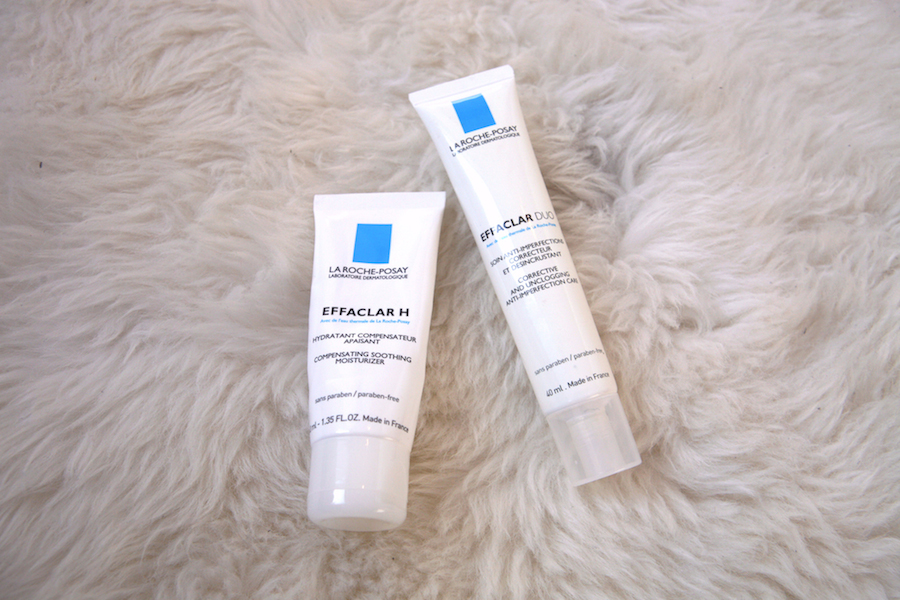 My second skincare favourite are my La Roche Posay cremes, the Effeclar H and Effeclar Duo. As I said before, I’m struggling with dry and oily skin at the same time. The combination of these 2 moisturizers really saved my skin. I don’t try new skincare brands often, because I’m usually too scared that the new products will break me out. So I’ve always sticked with La Roche Posay. I had a period, that I bit the bullet and started using other skincare brands, because I felt like La Roche Posay wasn’t doing that much for my skin, but my skin got even worse. So I returned to La Roche Posay, and dayum, I’m glad I did, because my skin looks way better now! 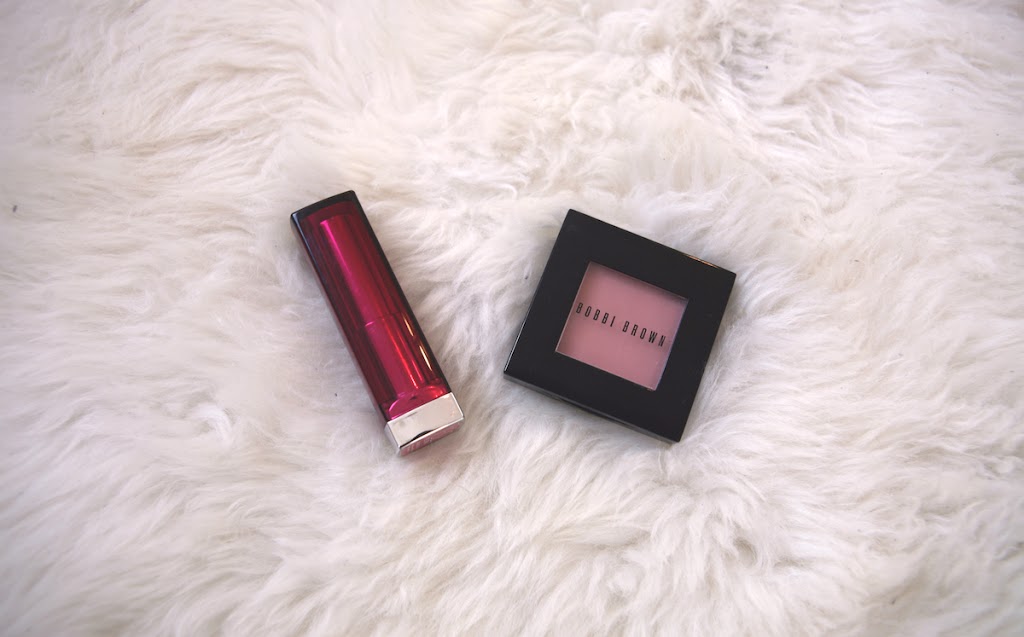 I also have a couple of make-up favourites. They are my Bobbi Brown blush in the colour Slopes and my Maybelline lipstick in the colour Feel Pink. I love pairing these 2 babies together, because they are very similar to each other colourwise, so they match perfectly. Lately, I’ve been loving wearing lipsticks. Previously, I’ve never really understood the fuss about lipsticks. Personally, I just found it very unpractical to wear lipstick. My lips are also pigmented at their own, so I never felt the need to wear lipproducts. But now, I’m kinda getting used to wearing something on my lips. The thing I love the most about lipproducts is that you can make your lips look more balanced (I have a very thick underlip and a less thick upperlip). The Maybelinne lipstick is the best ‘your lips but better colour’ I’ve come across, and it looks great with my Bobbi Brown Slopes blush.
Fashion 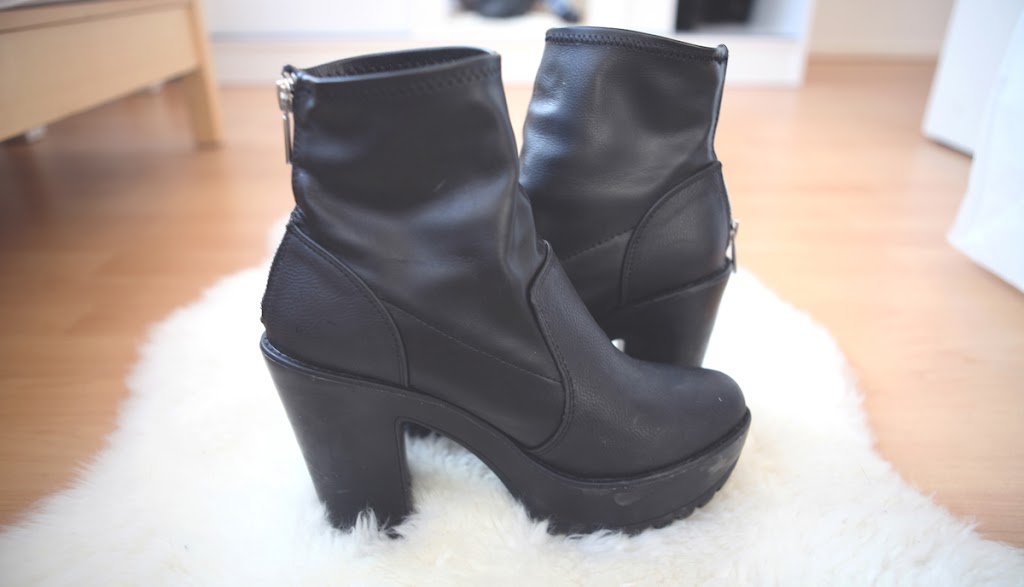 I only have one fashion favourite. And I didn’t even wear them that much, because they were not very handy to take with me to Dubai. They are my River Island Black Cleated Sole Platform Boots a.k.a. lovely monster booties. They’re supercomfy and I feel like a real badass when I’m wearing them. Ooh and don’t mind the dirty spots on them, these boots are made for walking!
Favourite OOTD 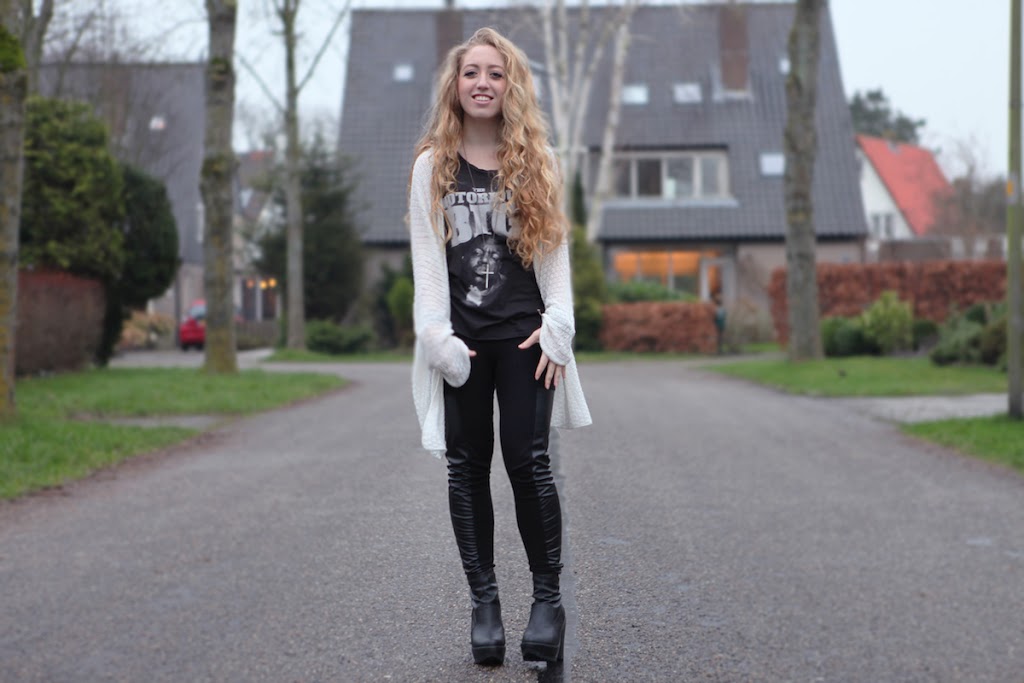 This was my favourite outfit of the day of January. If you want to read the full blogpost I wrote about this outfit, click here. Of course, it isn’t a coincidence that this outfit contains my monster booties, haha! But I’m also wearing my leather panel leggings and my Biggie shirt that I love.
Music
I have 2 songs that I was kind of obsessed with during the month of January. Their both not really my style, but I still really like them. The first one is That Korean Girl On Tumblr from Psykon. I first heard it in a video of Clothes Encounters, but this month I finally decided to download it. I usually don’t listen to music without vocals, but I’m glad I downloaded this one, ’cause I’ve been listening to it on repeat, haha.
The second song I’ve been listening to a lot this month is Fragile from Tech N9ne featuring Kendrick Lamar, ¡MAYDAY! & Kendall Morgan. I’ve never listened to Tech N9ne before (or heard about ¡MAYDAY! and Kendall Morgan), but I wanted to check it out because of Kendrick’s featuring. The song is from his new album, Something Else. Tech N9ne’s style of rapping isn’t really my cup of tea (he raps very fast, he was one of the first ones who start doing it), but in this song he doesn’t rap that fast. I’ve read a couple of reviews of the album and most critics are saying that his new album is really ‘something else’. So yeah, if you’re into hiphop, go listen to Fragile! I especially like the chorus and (of course) Kendrick’s verse. But I think Tech N9ne does a great job as well!
Books 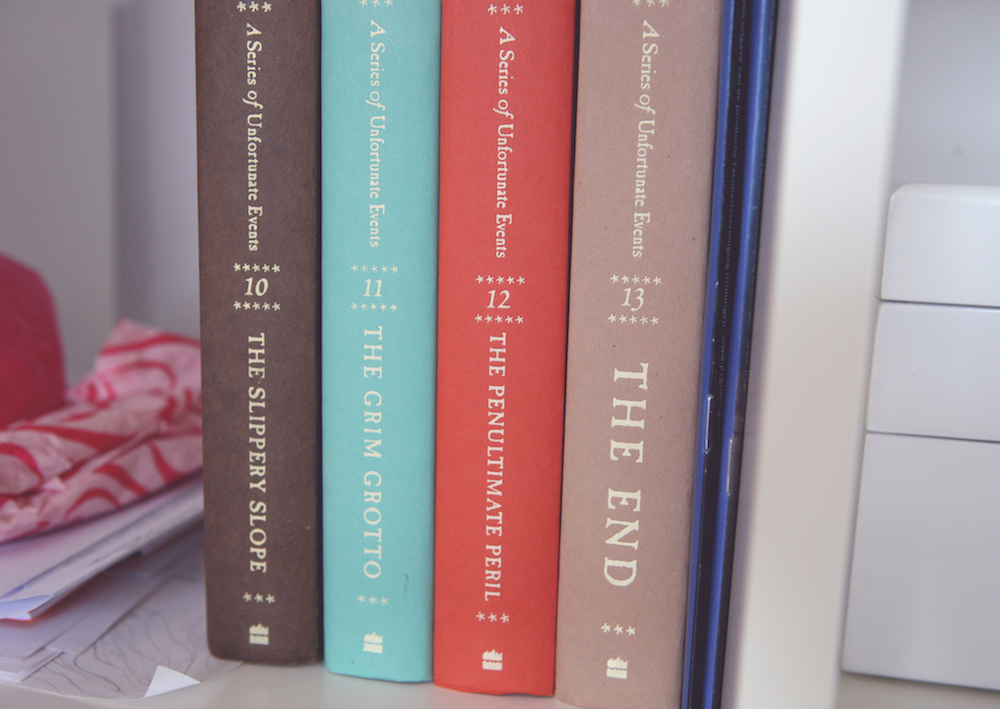 This isn’t really a January favourites, but more an all time favourite, but I still wanted to unclude it, because I’ve read almost 2 parts of the series this month. I’m talking about my favourite book series, called A Series Of Unfortunate Events, written by Lemony Snicket. It’s about 3 children, Sunny, Claus and Violet Baudelaire, who have lost their parents in a terrible fire. The children are placed in the custody of their distant cousin Count Olaf, who abuses them and wants to steal their huge fortune their parents left them. After the Baudelaires are removed from his care by their parents’ estate executor Mr. Poe Olaf begins to hunt the children down, to get his hands on their fortune. The serie contains 13 books. I’ve read the first 10 parts of the books in Dutch, but I have never finished the series, because they stopped publicating it in Dutch after the 10th book. But now I’ve decided to read them all in English and I’m almost done with the 10th part. After that I can finally start reading the parts of the series I haven’t read! A Series Of Unfortunate Events are children’s books, but I still really enjoy reading them.
Series 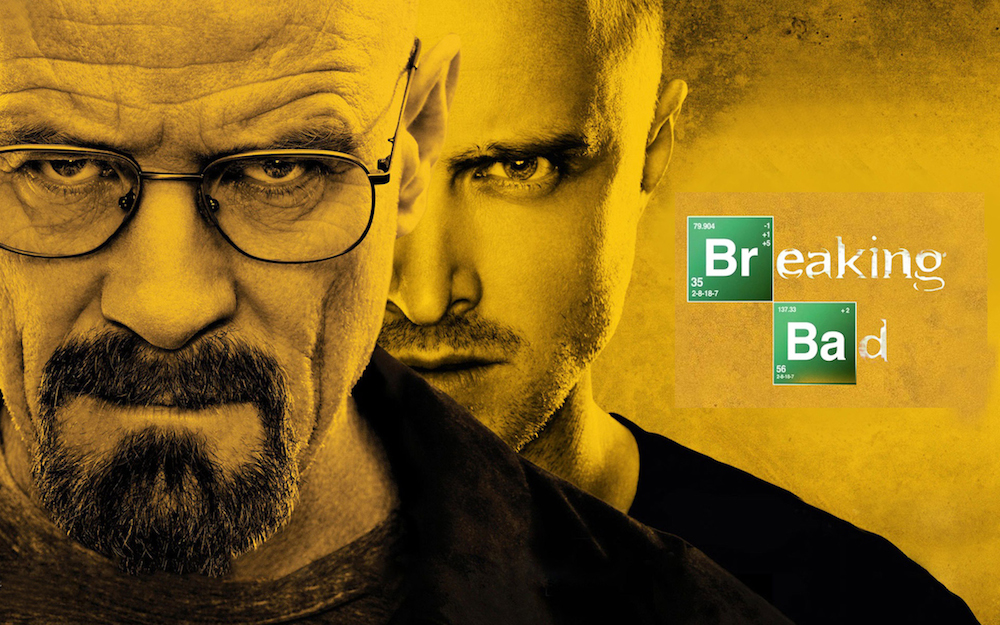 The series I watched the most this month was Breaking Bad. Dayum, it’s so good! When I was watching the first episodes, I didn’t really understand the fuss about it. But when I watched season 2 and 3, I was sold. Most series get a bit repetitive and boring after the first 2 seasons, but Breaking Bad gets better and better with every episode that you watch. It’s about Walter White, who is diagnosed with lung cancer. To provide for his family’s future, a chemistry genius turned high school teacher teams up with an ex-student to cook and sell the world’s purest crystal meth. Interesting storyline huh? The thing I love the most about Breaking Bad is the character development of the 2 main characters. I’m not gonna spoil the story for you, but I will say that the series is called Breaking Bad for a reason, haha. Ooh, and did I mention that it has a fucking 9,6 on IMDb?!
Movies