Hey!
Okay guys, I have kinda bad news. Well it’s probably not that bad for you, but for me it kinda is. A couple of days ago I got the results of my Honours College Philosophical Track sollicitation. Only 2 of the 6 people would get in. And I was not one of those 2. They told me that I was put on the waitinglist (together with the 3 other students that didn’t got in) and that they would have an additional meeting on the 18th of March about maybe creating some extra places for us. There’s also a chance that I could get in the normal Honours College (which is easier, they’re not as strict, but the selection there is also already finished, so I don’t know if they have extra places there either), but then I have to make objection. So yeah, I didn’t expect this outcome at all, nobody did if I’m honest. And there is still a chance that I will get in (Philosophical Track or normal Honours College), but as I said before, it wasn’t what I thought. This weekend wasn’t a very productive weekend for me either, I just chilled with some friends. But now I have to compensate that, because I was already a bit behind with my homework… But enough rambling for now! 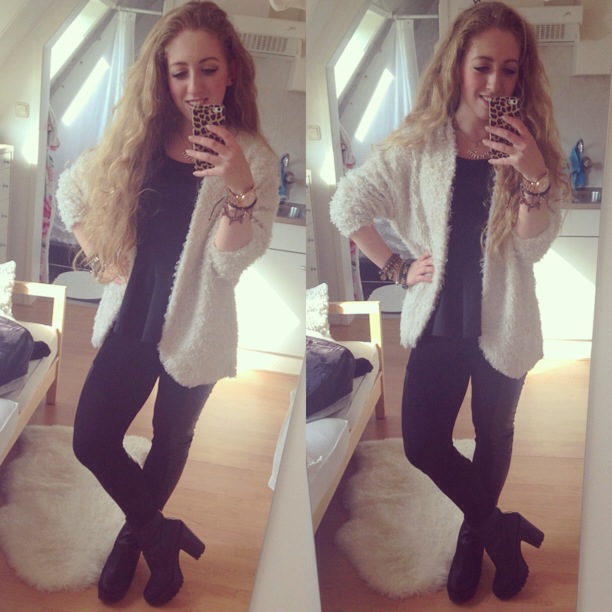 I’m wearing my new fluffy cardigan from H&M. It’s so soft and fluffy, I feel like a I’m wearing a little sheep, haha! It’s very big and oversized, despite the fact it’s the smallest size there is. I really like the slouchy look of it. I think cardigans can look a bit too strict sometimes, so I love it when they’re very big and not form fitting. They look way cooler that way, I think. I’m also wearing a peplum top from Monki. Peplum tops are great to create the illusion of a hourglass figure. I don’t have a very thin waist or hourglass figure for that matter (I’m a mix between a pear and boyish shape), but when I’m wearing a peplum top it looks like I do have a hourglass figure.
My leather panel leggings are from H&M and they go perfectly with my beloved monster booties from River Island. I’m also wearing my daily armswag and my latest obsession, pairing multiple dainty necklaces together. I just really like the effect that it gives. It still catches your eye, without being to obvious, if you get what I mean.
I think this outfit is on the feminine side, but without being too girly. I have a very edgy, hiphop inspired style, but sometimes I like to look a bit more put together and dressy. Outfits like this one are perfect for that, because they still show my love for edginess, because of the leather and chunky boots.
Well that’s it for this post. I hope you’re having a nice sunday and ejoying the weather (wish I could do that…). Talk to you later guys!
xoxo Lilia