I arrived in Marmaris, Turkey! It’s really beautiful again here, just like Rhodes. We took the catamaran from Rhodes to Marmaris, and it was only 1 hour. The nature here is still different, despite the fact we’re not that far off. I don’t know which one I like more. Now we’re in this huge, luxourious resort, but the other hotel we stayed in (Lindos Blu, definitely recommened that one, the people were so freaking sweet, never had such a good experience before anywhere!) was also chique, but way smaller. I think I liked Rhodes more, just because I don’t like the overwhelming, huge hotelshit. But it’s still a really nice hotel here as well though!

Anyways, today I’m going to show you the second outfit I wore in Barcelona during the day. I’m actually wearing something that was a bit out of my comfort zone and I wasn’t sure if I wanted to buy it. But something about it made me change my mind, it looked just way too cool to pass out on. And I’m so glad I did, because I got a lot of compliments while wearing it and it’s already one of my favourite pieces to wear. Did I make you curious? Well, if I did, keep reading! 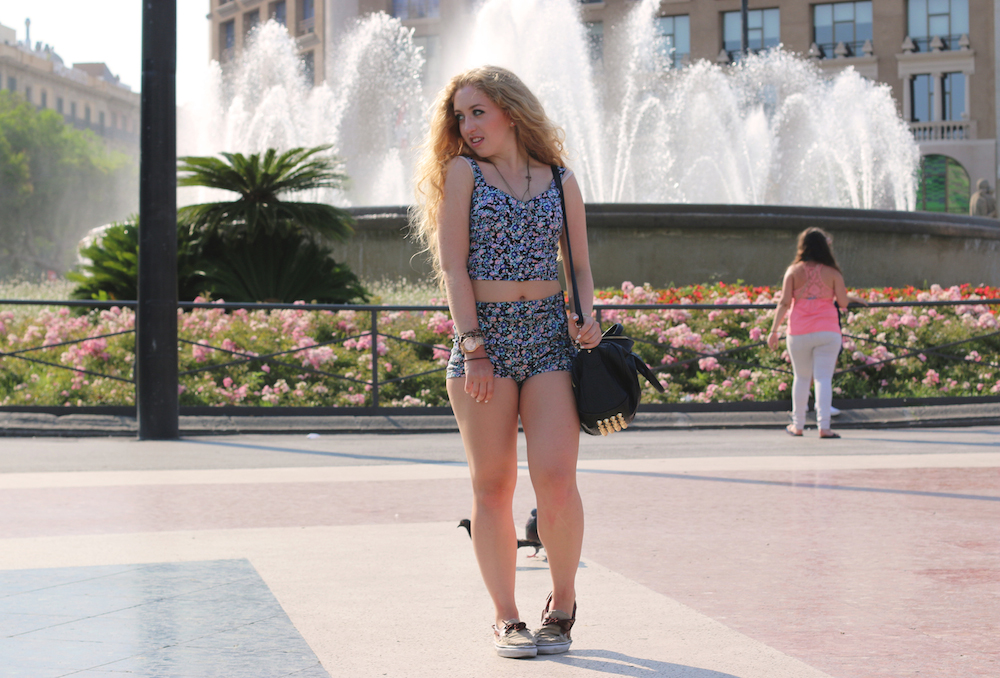 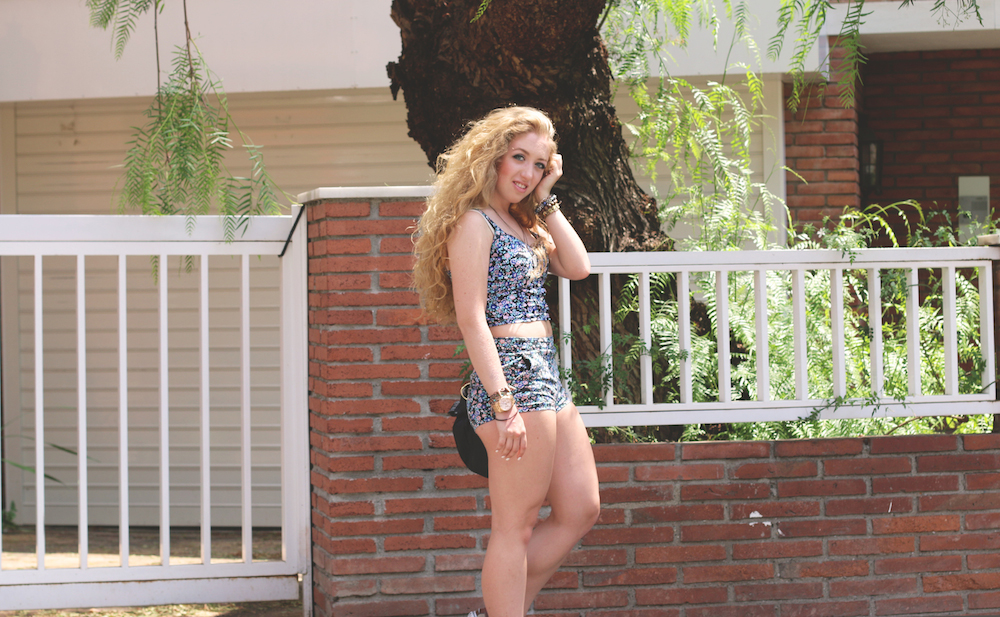 I’m wearing this matching, floral two piece from H&M. I think it’s so freaking cute! I don’t like floral prints in general, but for this one I made an exception. The flowers are pretty small, so I don’t feel like a totally girly flowergirl or something. The top has a bralet type model, which is really flattering for girls with not that much going on in the boob area, haha. The shorts are really comfortable, because they’re from a cotton material and are pretty stretchy. I hate wearing uncomfortable clothing in the summer, so it’s a big plus for me that this two piece isn’t uncomfortable. I also feel like this two piece makes me look skinnier or something? Which is a good thing, lol. The bag that I’m wearing is from Brandy Melville and it’s one of my favourite bags, because it totally looks like an Alexander Wang Rocco. Way cheaper though, haha. 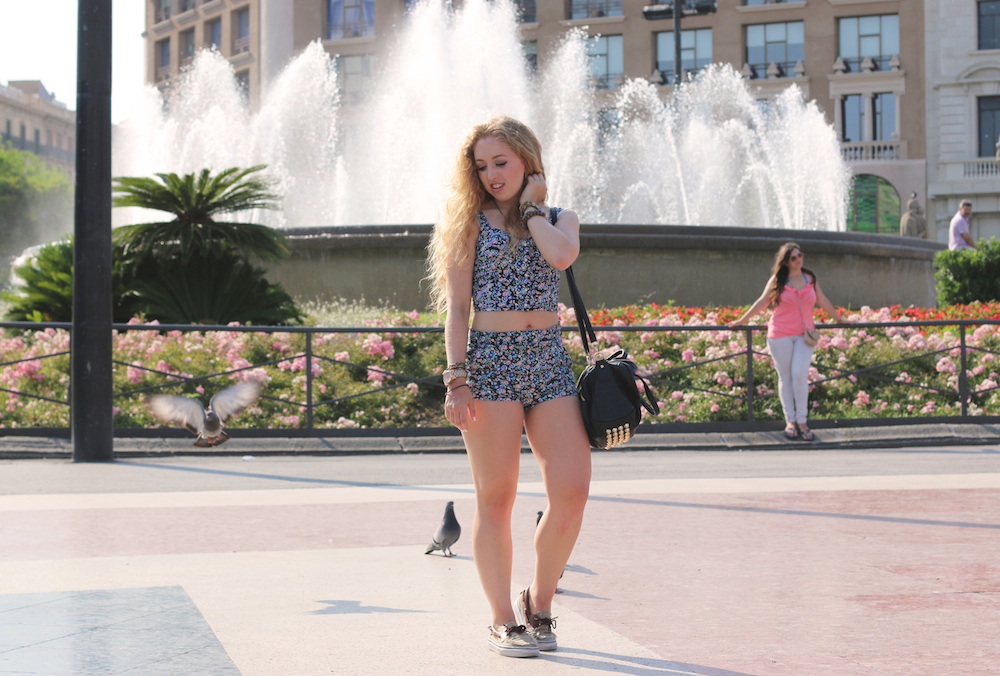 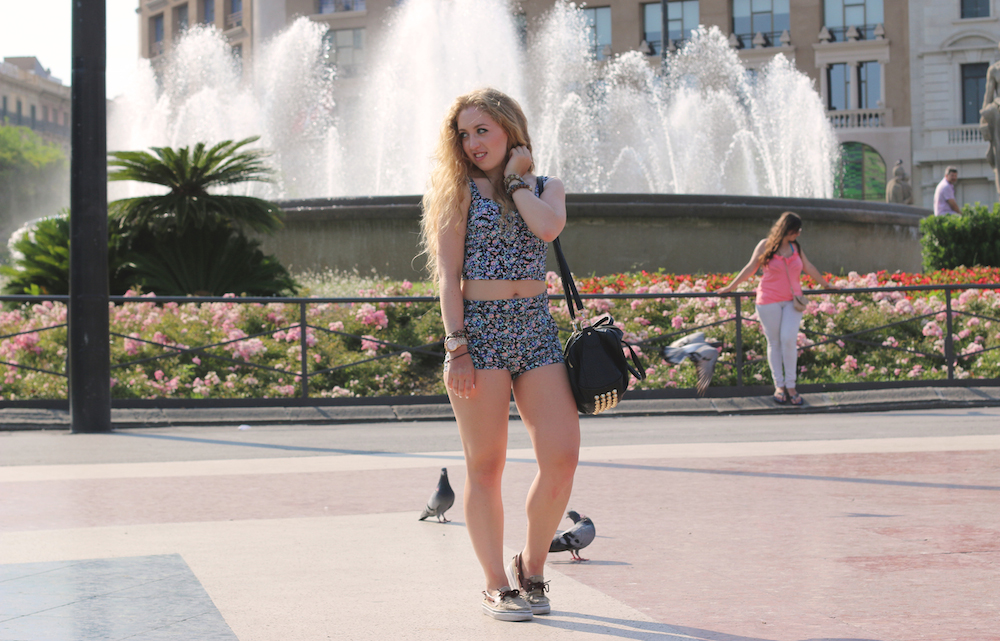 We took the pictures on this huge square with fountains in Barcelona. No idea what the name is, oops. It looks pretty though, right? 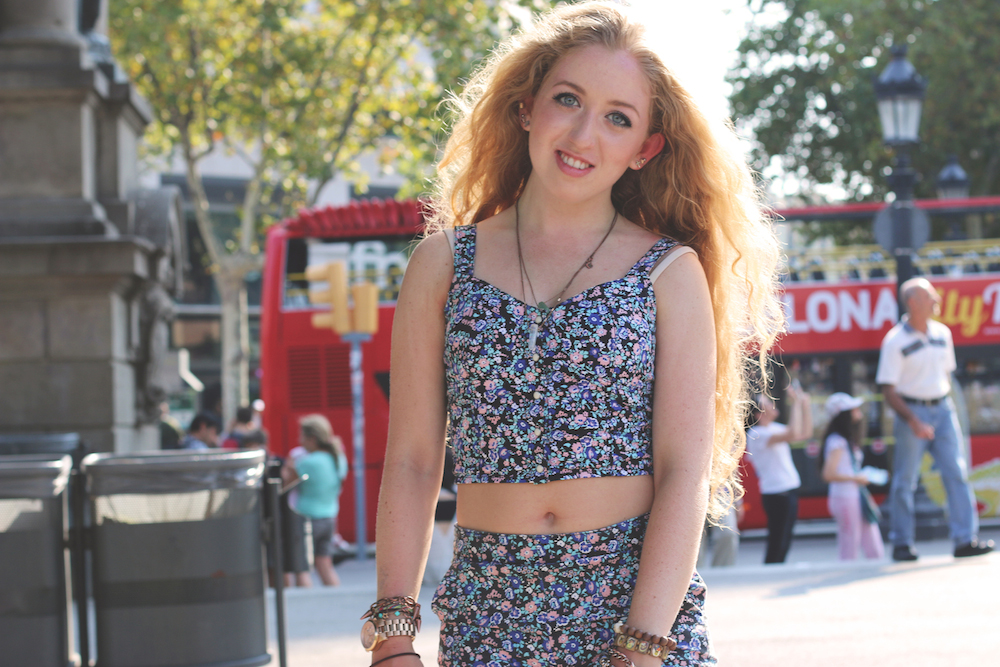 Okay, maybe it’s just me, but I feel like my hair looks so fucking long in this picture, don’t you think? 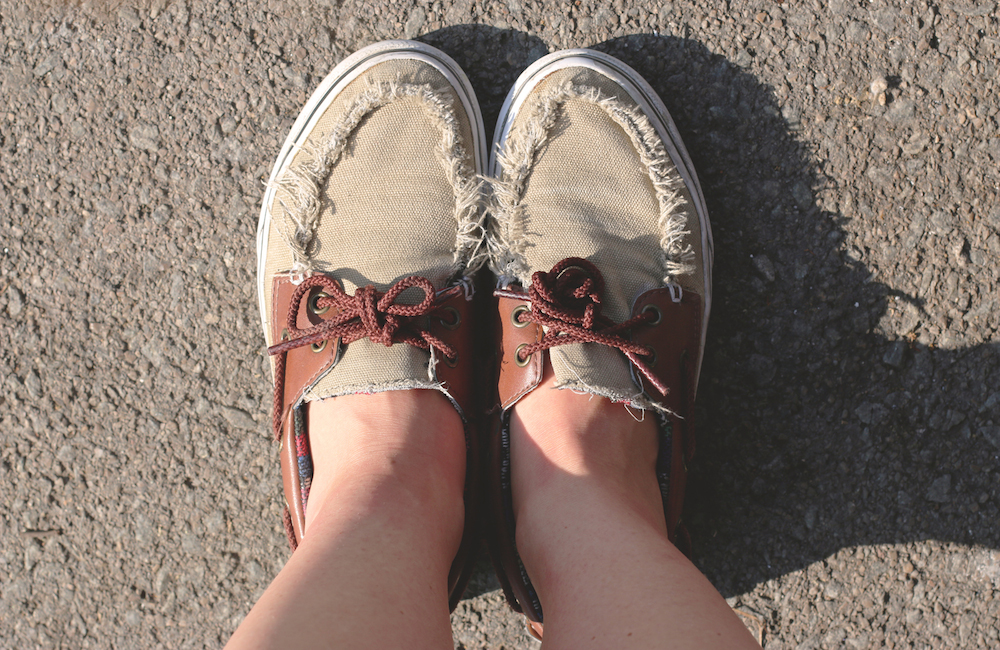 The shoes I’m wearing used to be my favourite sneakers (but now my Nike Janoski’s replaced them). They are the Vans Zapato Del Barco sneakers. I love the colour and the leather detailing of them. The beige colour looks really good with bare legs if you ask me. That’s why I love wearing them in the summer. And they’re also really comfortable! 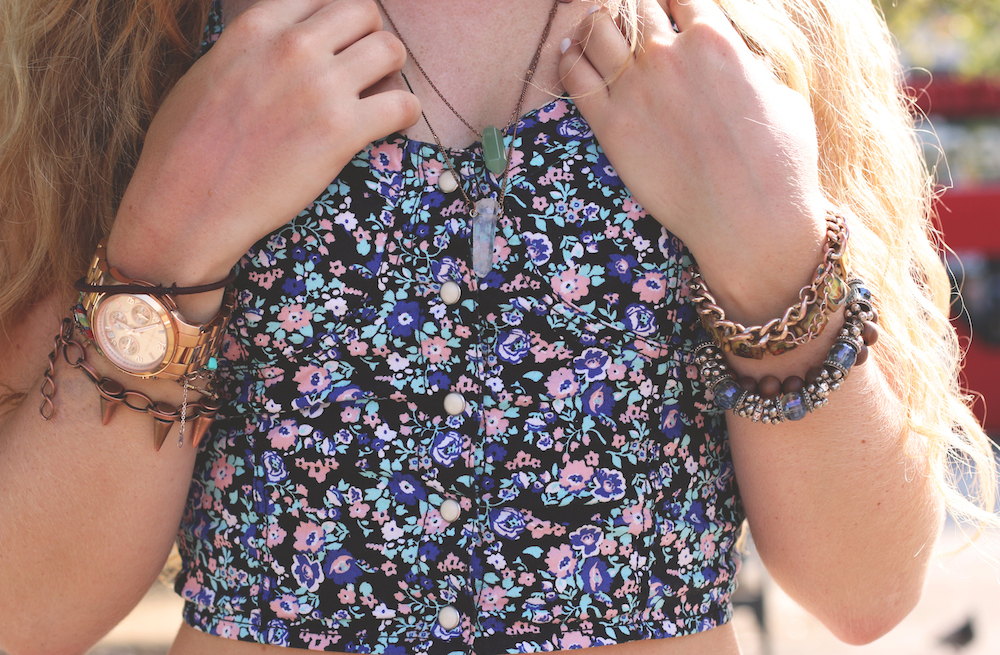 For jewellery, I’m wearing my daily armswag and these two necklaces from Brandy Melville that I’ve been wearing non-stop. I don’t know why, but I just really love how these two pieces look together. They have this really casual vibe, like ‘Ooh yeah I just threw on some necklaces, but accidentally they look perfectly together.’ I’m also wearing earrings from F21, H&M and River Island, together with an earcuff from F21. 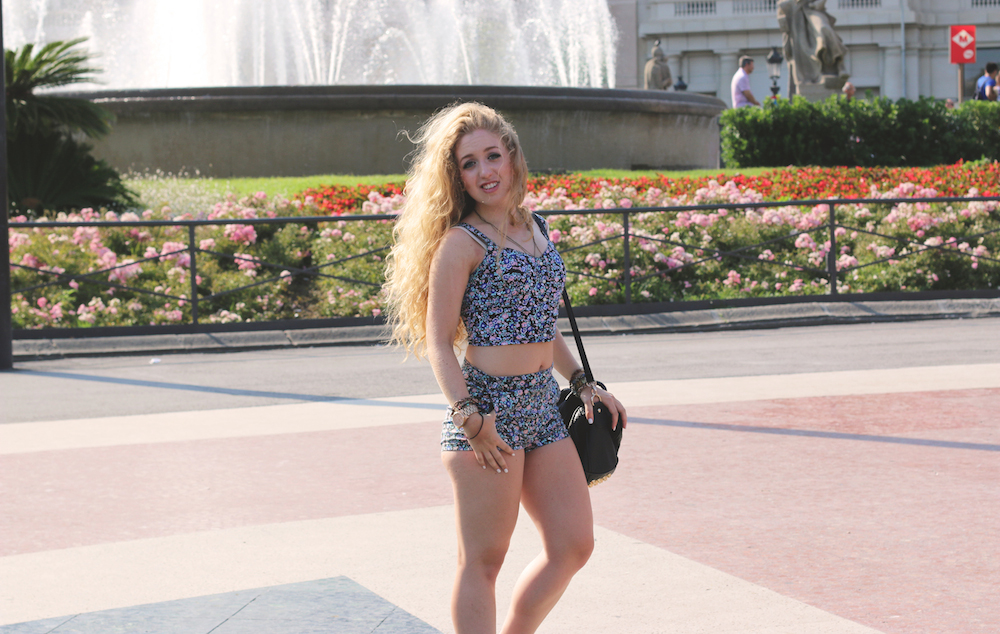 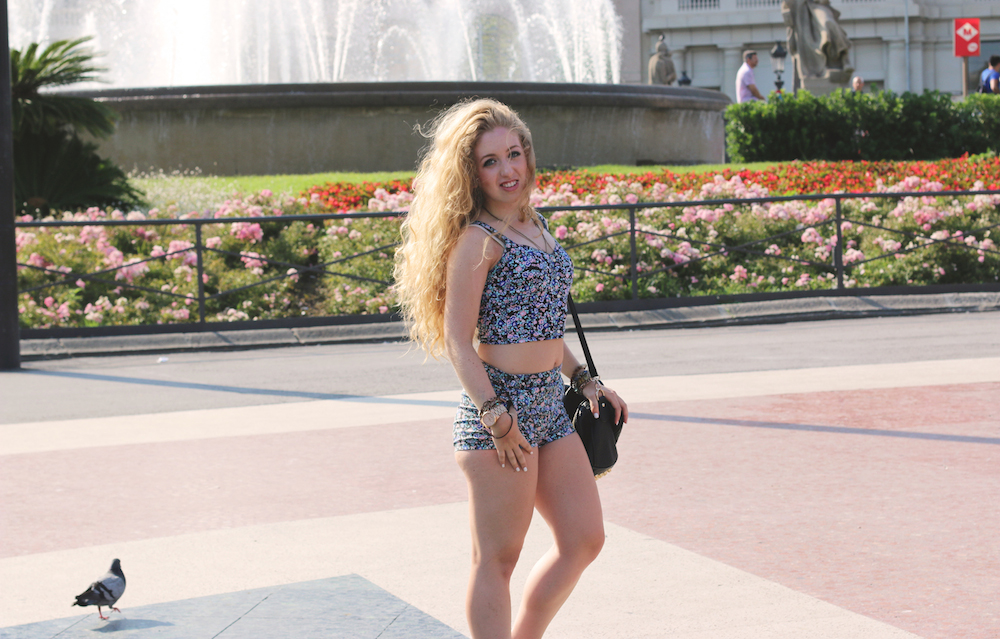 I hope you enjoyed this ootd! Now I’m off to the beach (finally!) and I’m going to do some cool water activities. I think I’m going to try to wakeboard, although I’ve never done it before and everybody said it was really hard. YOLO! What are you upto for today? I would like to know! See you tonight with an outfit of the night again, yayy :).